A coroner’s office inquest into the death of 18-year-old Andres Guardado, who was fatally shot by a sheriff’s deputy in Gardena, upheld a previous conclusion by the office that his death was a homicide, officials announced Friday.

The inquest — the first conducted in Los Angeles County in more than 30 years — found that Guardado’s “manner of death was by the hands of another person other than by accident,” wrote retired California Court of Appeals Justice Candace D. Cooper, who oversaw the probe. His cause of death was multiple gunshot wounds, she wrote. 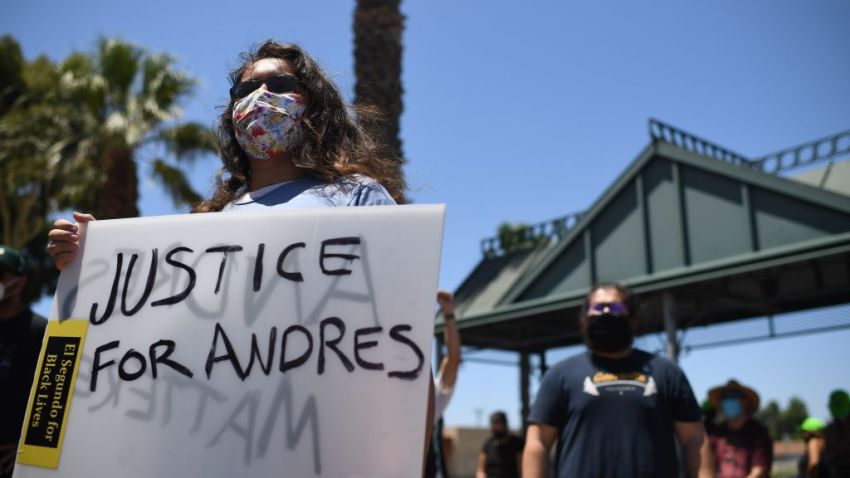 The findings were based on testimony from medical experts, investigators and witnesses at the scene when Guardado was shot at by deputies, as well as subpoenaed records from the Los Angeles County Sheriff’s Department, which were not released publicly.

In a statement, Guardado’s parents, Cristobal and Elisa Guardado, said Cooper’s finding “has confirmed what we knew all along.”

“We now call upon District Attorney (George) Gascón to do what the sheriff’s department has not, and that is to take action and hold these deputies accountable for their criminal actions,” read the statement, which was sent by the family’s attorneys.

“Andres was a good person with his whole life ahead of him. That life was violently taken from him, and we suffer the consequences as his killers remain free. Our family will not rest until we have justice for Andres”

Gascón’s office did not immediately respond to a request for comment on the family’s remarks made after the close of usual business hours.

During the Nov. 30 inquest proceedings, multiple members of the sheriff’s department declined to answer questions, citing advice from attorneys.

> Reporter: THESHERIFFu2019S DEPARTMENT ANNOUNCING AS SHE INVESTIGATE THE DEPUTY-INVOLVED SHOOTING, THEY ALSO HAVE A PARALLEL INVESTIGATION THAT POINTS TO CONTINUED CRIMINAL ACTIVITY AT THE VERY BUSINESS WHERE GUARDADO WAS KILLED. >> I PROMISE TO BE TRUTHFUL AND BE TRANSPARENT. >> Reporter: THE SHERIFF REITERATING A PROMISE TO KEEP REITERATING A PROMISE TO KEEP THE PUBLIC INFORMED ON THE DEATH OF THE 18-YEAR-OLD ON JUNE. HE WAS SPEAKING WITH THE OCCUPANTS OF A WHITE LEXUS BEFORE DEPUTIES APPROACH AND HE TAKES OFF RUNNING AND DEPUTIES CHASE AFTER HIM INTO AN ALLEY. >> AT SOME POINT MR. GUARDADO WAS SEEN IN POSSESSION OF A HANDGUN AND RAN SOUTHBOUND DOWN THE DRIVEWAY OF THE BUSINESS. >> Reporter: CHRIS MARK SAID THEYu2019VE BEEN UNABLE TO PROVE HE WAS PLOYED AS A SECURITY GUARD BUT THEY ALSO ADMIT THERE ISO EVIDENCE OF THE SHOOTING EITHER. BECAUSE THEY SAY DEPUTIES HAD PULLED THE DVR FROM THE BUSINESS 11 DAYS PRIOR TO THE SHOOTING. >> THERE IS THE SAME DRIVEWAY THAT HE RAN DOWN FROM THE STREET IN THE PREVIOUS VIDEO. >> THERE IS THE VIEW THEY COULD HAVE HAD IF IT WERE NOT FOR ANOTHER SHOOTING 11 DAYS BEFORE HIS DEATH. PEOPLE WERE LINED UP TO BUY ILLEGAL NITROUS OXIDE, SOMEBODY ELSE WAS SHOT IN THE DRIVEWAY. >> THEY ENCOUNTERED A VICTIM AND OBSERVED A BLOOD TRAIL LEADING TO THE TO THE BUSINESS. >> Reporter: THIS ANGLE SHOWS PEOPLE RUNNING FROM THE SCENE AFTERWARD. THE VICTIM SURVIVED BUT THIS INVESTIGATORS SAY SHOWS A PATTERN OF PROBLEMS AT THE SAME LOCATION. >> THERE IS OBVIOUSLY A PATTERN OF CRIMINAL ACTIVITY OCCURRING AT THIS LOCATION WHICH IS WHY THE DEPUTIES WERE DRAWN TO THAT LOCATION. EXPLAIN WHY THE DEPUTY WOULD SHOOT THE MAN FIVE TIMES IN THE BACK. IN A STATEMENT FROM FAMILY, THEY CALLED TODAYu2019S ANNOUNCEM CHERRY PICKING THE FACTS TO JUSTIFY HIS DEATH AND THIS NEW VIDEO ONLY SHOWS A SCARED YOUNG MAN RUNNING FOR HIS LIFE. THE SHERIFFu2019S DEPARTMENT IS NOT READY TO TURN OVER THIS OVER TO”,”video_id”:”1775207491990_694″,”video_length”:”140074″,”video_provider”:”mpx”,”alleypack_schedule_unpublish”:””,”feed_remote_id”:”mpx_1775207491990″,”feed_thumbnail_url”:””}’ data-livestream=”false” data-title=”New Video in Controversial Andres Guardado Shooting Revealed” data-vidcid=”1:9:2412074″ data-vidurl=”https://www.nbclosangeles.com/local/new-video-in-controversial-andres-guardado-shooting-revealed/2412074/” data-islead=”false” data-catnames=”{}” data-tagnames=”{}” data-customdata='{“ContentPartner”:”None”,”Source”:”WEBFM”,”SyndicationAllowed”:”true”,”mSNVideoCategories”:”MSN Video v4 Connector-most watched news”,”mSNVideoContentSupplierID”:”NBC_Local”,”mSNVideoCountry”:”us”,”subtitle”:”nosubtitle”,”uploadedByTeam”:”1″,”youtubeChannel”:”None”}’ data-autoplay=”false” data-cplay=”true”>

The sheriff’s department did not immediately respond to a request for comment on the inquest findings made after the close of usual business hours.

Two doctors who conducted autopsies on Guardado confirmed during the Nov. 30 proceedings that he was shot five times in the back.

Lianna Darabedyan, a coroner’s investigator assigned to the case, testified that a gun was found about three to five feet to the right side of Guardado’s head as his body lay face-down on the ground.

County firefighter/paramedic Andrew Clemens, who responded to the shooting scene, said Guardado was pronounced dead within about three minutes after paramedics arrived.

The sheriff’s department has said Guardado was reaching for the gun when he was shot  onJune 18 in a driveway on West Redondo Beach Boulevard in an unincorporated area near Gardena, while working as what has been described as an informal security guard for a nearby auto body shop.

Deputies said he was not wearing a guard’s uniform when they responded to a report of a non-fatal shooting in the area, and that he wasn’t licensed as a guard or old enough to hold that job under state law.

Guardado’s family has filed a suit against the county alleging wrongful death and civil rights violations.

An inquest into another fatal shooting by a Los Angeles County deputy is scheduled for Jan. 28. Cooper was also appointed by the coroner’s office to investigate the death of Fred Williams III, who was shot and killed by deputies Oct. 16 while running away from them with a handgun.