A large crowd estimated to be upwards of 20,000 people by Los Angeles police participated in a march Sunday in support of Armenia in its conflict with Azerbaijan and Turkey over the disputed Nagorno-Karabakh region.

“Artsakh Under Attack: March for Victory” was scheduled to begin at 3 p.m. at Pan Pacific Park, 7600 Beverly Blvd., and conclude at the Turkish Consulate at 8500 Wilshire Blvd.

Beverly Hills police said there might be road closures in the area between 1 p.m. and 7 p.m.

Los Angeles County is home to the nation’s largest population of Armenian immigrants, and multiple demonstrations have taken place over the past week against what many of them call Azerbaijan’s aggression against Armenia and Nagorno-Karaabakh, also known as Artsakh.

The mountainous region is controlled by ethnic Armenians but is inside Azerbaijani territory. Armenia and Azerbaijan have been engaged in conflicts for years, but the situation escalated in July when Azerbaijan threatened to blow up a nuclear power plant in Armenia.

A statement from Azerbaijan’s Ministry of Defense accused Armenia of violating a temporary ceasefire brokered by Russia this weekend. Azerbaijani authorities said four women were among at least nine people killed when a residential building compound was hit during an Armenian bombardment of Ganja, Azerbaijan’s second-largest city.

Los Angeles City Councilman Paul Krekorian introduced a resolution a week and a half ago that was immediately passed by the City Council condemning the actions of the Azeri government. 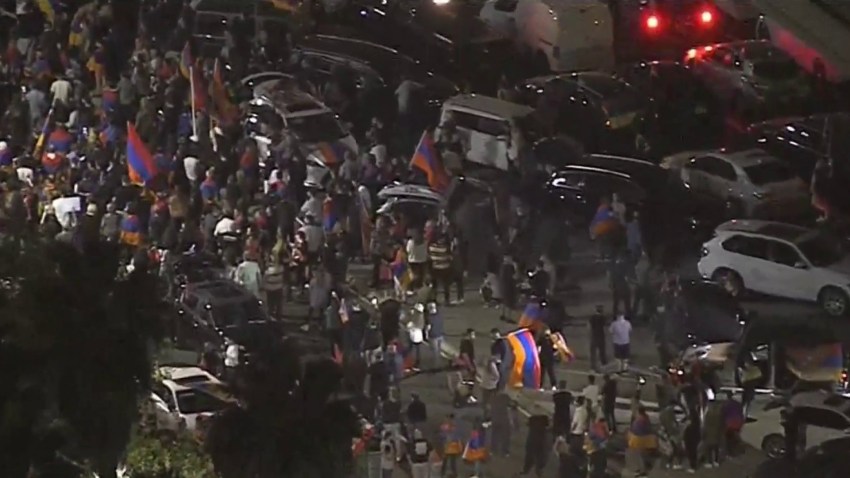 Krekorian is of Armenian descent.

Nasimi Aghayev, Azerbaijan’s consul general to the Western United States, released a videotaped statement last weekend saying, “Azerbaijan is defending itself, its civilian population, on its own soil and with its own armed forces.”

Aghayev denied that religion has played a role in the conflict and described portrayals of it as such as “propaganda advanced by Armenia and its allies.”

In addition to the ongoing pro-Armenian protests in Los Angeles, the Armenian community has been on the street raising millions of dollars to send back to Armenia and Artsakh as humanitarian aid, according to Maria Mehranian, president of the Glendale-based Armenian Fund. The money includes a $1 million donation to the fund by Kim Kardashian West.